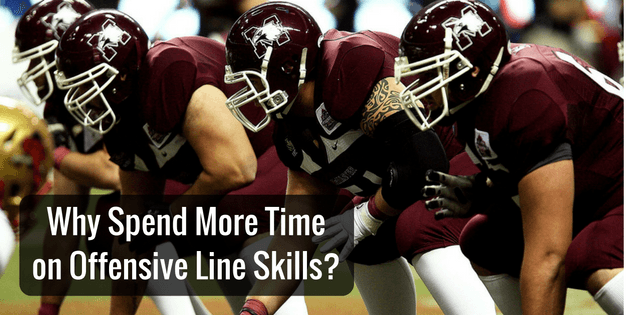 Are there specific offensive line skills our kids should be learning?

Of course there are!

So why do coaches not spend the time to teach offensive line skills?

We have quarterbacks, running backs and receivers doing ball drills all year long.

The traditional “skill” players are now very heavily involved in 7 on 7 leagues and there are tons of camps designed for these positions.

What do we have the linemen do?

While getting bigger and stronger is certainly important, there are actual position specific skills to focus on as well.

Linemen make up nearly half of the offensive team on the field.

Include a tight end, who should have these skills, and it’s more than half.

Yet we often spend the least amount of time developing offensive line skills.

We hit sleds, we hit each other, but we don’t work enough technique.

What are some of the skills offensive linemen can be working on?

Is stance really a skill?

It is. And it’s quite possibly the most important skill for young linemen to learn.

Offensive line is the most unnatural position in sports.

Getting into a stance is unnatural and takes a lot of time and repetition.

An offensive lineman’s stance is the foundation of their game.

Without a great stance, players are limited in their ability to make great plays.

Speed is not a necessity in the offensive line.

Once players perfect their stance they then need to be able to get out of that stance and attack.

Having fast feet will allow them to get into the proper position to make a block.

Keeping their foot in the ground is also important to maintain strength, leverage and balance.

All or which are needed to be a good offensive lineman.

Up front, football is about striking and maintaining blocks.

A player’s speed and strength with their punch helps them to create leverage.

Keeping tight hands is critical to having an effective and powerful punch.

Tight hands also keep referees’ flags in their pockets. (Because we NEVER hold… 😉 )

We have a lot of coaches and players tell us they don’t really need to ever pass set.

If you want to have any chance to play at any college level then learn to pass set.

The technique will help your balance and lateral movement.

So even if you are in an offense that never uses a pass set, there is still a benefit to learning the techniques.

These are all skills that players can work on year round.

They may not be flashy but if a young player makes the time to put in the work it will pay off.