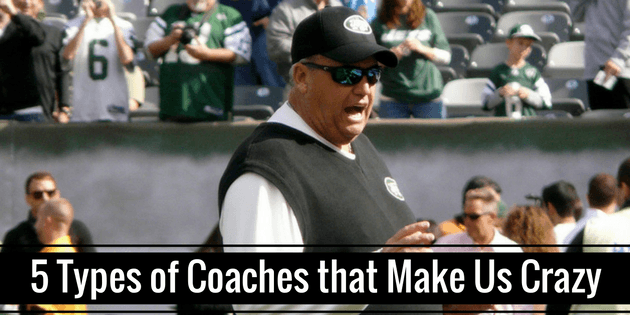 If you are around sports long enough you get to meet many different types of coaches.

Some good, some bad, some crazy. Some that make us crazy.

Before we get into discussing the types of coaches that drive us crazy I want to say that I admire every coach.

Being a coach is a very special job.

It’s not always an easy job and it’s not for everyone.

But anyone who really tries and has the kids best interest at heart should be applauded.

No matter how “good” of a coach they are.

In today’s video, I discuss a few types of coaches that are difficult to deal with and some tips to make the best of each situation.

We’ve all had a yeller for a coach. Screaming Steve has to hear his voice over everyone and everything.

In fact, you probably wonder if Steve is trying to be heard 3 towns over.

First off, not all coaches that yell are bad. Some of the best coaches I have had were loud and obnoxious at times.

The reason they were good, however, was that they were instructing not just yelling.

That’s not coaching. Those things don’t make anyone better.

A coach instructs a player on how to block, how to tackle and how to play better.

How to deal with Screaming Steve:

I once got a great piece of advice about yelling coaches.

Most coaches yell because they care and they are trying to make you better.

If they stop yelling… that is when you worry.

Try to explain to your athlete that yelling doesn’t mean a coach doesn’t like you.

It’s often that they just want to make you a better player.

That’s the best coaching advice I have ever been given.

Yet there are many coaches who focus on telling players what they are doing wrong.

Of all the types of coaches, Negative Ned is the most difficult for me to accept.

Now you might say, “Well isn’t that what a coach is supposed to do?’

Not really. A coaches job is to teach.

Again, what we are talking about here is the style of the coach.

Leading with criticism automatically puts a player, especially a young player, on the defensive.

Negativity will always breed this reaction.

Even if the coach teaches the proper technique incredibly well, if they led with negativity all time, the player will not absorb the teaching as well as if they had led with positivity.

“Well it can’t all be rainbows and sunshine, right?”

Maybe not. But If a coach leads with a positive comment they will get better results.

Negative Ned stops the drive blocking drill by yelling, “Stark! Are you kidding me? That was a terrible block! You have to get your helmet across on this play. Do your job!”

What’s wrong with the statement by Ned?

First, the sarcasm with “Are you kidding me?” is worthless. It serves no purpose other than to belittle the player.

Second, after your athlete hears “That was a terrible block.” They are going to tune out the rest.

Your athlete gets defensive and shuts down.

Here’s the second scenario from another coach named Positive Pat.

Positive Pat stops the drive block drill and says. “Stark! Great job with your feet and I really like how you used your hands there. The only thing I want you to do better on this play is to get your head across. That’s going to get your head in the hole and help you sustain your block.”

Pat reinforces what the player did right in the drill and then made a correction and told him how he could do it better next time.

Another key point here is to explain WHY the player needs to make the correction.

Can you see the difference here? It’s night and day. Great job Pat!

How to deal with Negative Ned:

Tell your athlete to focus on the instruction.

The negative comments are often that coaches way of trying to get a players attention.

As an athlete, you have to build up a thick skin because there will always be negativity.

Unfortunately, negativity is everywhere and not just in sports.

There’s always that guy that know ever by-law of every rule set out in the rec league handbook.

And Loophole Larry enforces then every chance he gets.

Even if it means holding up a game to argue with a referee and look the rules up.

(Larry keeps a copy of the league handbook in his back pocket at all times. He probably sleeps with it.)

Larry is very much concerned with the 5th-grade league championship.

He plays all the kids, but the best players play 90% of the time.

How to deal with Loophole Larry:

This is a great time to teach your athlete the importance of patience.

Patience is the key.

The problem with Larry is that he is often correct about the rules.

Especially the more odd and obscure ones.

Norman was an Honorable Mention All-Region defensive tackle back in the day.

He knows the game inside and out… just ask him.

His way is the ONLY way that is acceptable.

Norman is very defensive about his coaching and thinks all the parents are idiots.

Even the ones that had a cup of coffee in the NFL.

Mr. Know-It-All also generally fits into one the first two types of coaches with Screaming Steve and Negative Ned.

How to deal with Know-It-All Norman:

Offer to help with the team.

Even if it’s just occasionally helping with a drill.

Know-It-All Normans tend to tone it down when there are other confident adults in the vicinity.

Carl’s a real laid back dude.

He’s never really played any sports but he wanted to volunteer for his kid. (Which is great by the way.)

But Carl just lets the kids kind of coach themselves.

Freedom and having fun are all Carl is about.

Now, kids should have fun when they play any sport but a coach must also maintain control of a team.

Too much freedom and flexibility can lead to unmotivated players.

That’s when the team goes sideways and that’s never good.

How to deal with Casual Carl:

This is another opportunity to step in and help.

Adding a little structure to the team may be enough to keep it from becoming a free-for-all.

The Best Coach I Ever Had

In college, I definitely had a Screaming Steve for a coach.

At first, I was terrified of him.

This coach was so intense that there were times I didn’t think I was going to make it at college.

Eventually, I figured out that it was just his style of coaching.

He was mad at the players.

He just used yelling as his way to teach.

The thing that really made me realize this was his attention to detail.

He was the most technically demanding coach I have ever met.

That paid off for me as I was not always the biggest or strongest guy on the line.

However, I was a great technician of the game and my coach made me that way.

There are many types of coaching styles.

Did you ever experience a difficult coach as a player or parent of a player?

Have you experienced any of these types of coaches?How did you handle it?

How did you handle it?

We’d love to hear your comments.

I hope you found some value with today’s post.