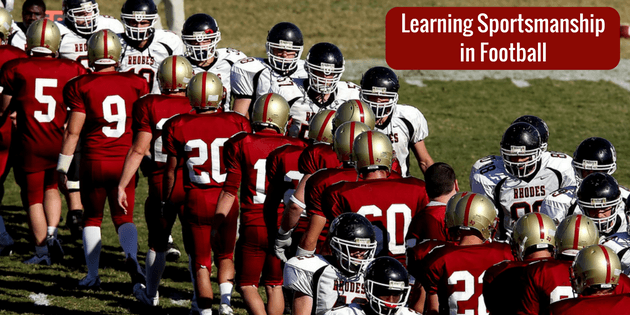 Sportsmanship in football is all about respect.

Players have to have respect for their teammates, coaches, officials, and opponents.

As we have said many times, football is a very emotional sport.

It can be difficult for players to keep their composure and make good decisions.

This past weekend I watched #3 Louisville vs. #5 Clemson.

It was a great game.

There was one play however that really disturbed me.

Boulware, after Jackson is down and in the pile, has Jackson around the neck and continues to crank hard on his neck.

Check out the video below and comment about what you see.

It was dirty and there is no place in football for this kind of play.

In today’s video I discuss a few ways coaches and parents can help build sportsmanship in football.

Give constant reminders of what is acceptable behavior.

As parents, we do this at home all the time.

What’s amazing to me is how some parents forget this when their kids play sports.

“It’s just part of the game.” “It was in the heat of the moment.” “He’s just being aggressive.”

It’s not difficult to see right from wrong on a field or a court.

I actually know parents who take joy in seeing their kids be bullies on the field.

It’s not hard to see where these kids get this behavior.

Coaches and parents need to make behavior the highest priority in youth football.

This behavior carries over.

Kids who act poorly on the field often do so in the classroom and other social interactions.

Respect is a lesson we can teach every day in football.

It will carry over to every part of an athlete’s life.

Be a positive example of sportsmanship.

Kids learn from the adults in their lives.

Parents, coaches and other mentors influence a child’s behavior more than anything else.

That includes their peers.

Our kids want approval from their parents and coaches.

They want to make us happy.

Be sure that you give them the right example of how to behave both on and off the field.

At the youth level, everything we do should be about making sure the kids are enjoying the game.

We lose too many kids that we don’t help have fun with football.

We need to spend time and effort teaching our kids fundamentals of the game and making it fun.

If the same 11 kids play every game, only those 11 can improve.

It takes more than 11 players to win games.

It takes more than 22 players to win.

It takes a team and in order to keep kids around and playing we have to make it fun.

Can you be aggressive and display sportsmanship in football?

You can be aggressive and still display sportsmanship in football.

When I stepped onto a football field I wanted to destroy the team I was playing against.

But I still always had respect for my opponent.

There is no better feeling as an offensive linemen than driving a defender 10 yards off the ball and planting them on their back.

There is nothing more demoralizing for your opponent than getting up after that block and helping them back to their feet.

However, this is where so many players struggle.

If a player makes a great play it’s okay to celebrate.

Too many young players like to posture and taunt.

There’s nothing wrong with celebrating but players can do it without showing up their opponent.