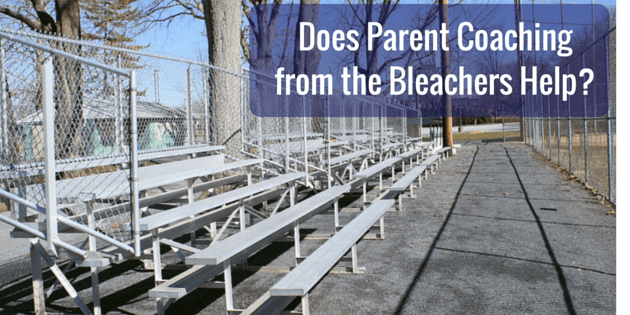 Does Parent Coaching from the Bleachers Help?

Is a parent coaching from the bleachers helping their child’s performance?

The answer is no and in many cases parents who yell instructions from the sidelines actually have a negative impact on their athletes performance.

That’s the reason we are so passionate about watching our kids play sports.

However, what we say from the bleachers can have a huge effect on our children’s performance.

And not in a good way.

A few years back I had an opportunity to listen to sports psychologist, Dr.Alan Greenberg speak to a group of youth parents.

He explained something that I knew about parent coaching but had never quite put together until his presentation.

Athletes spend hundreds if not thousands of hours practicing the skills required for their sport.

The reason athletes spend so much time practicing is obviously to get better, right?

They also put in all this time to have those skills become instinctual.

What Dr. Greenberg explained is that we want athletes primarily using the part of the brain that supports these instinctual skills.

The muscle memory and instinctual play is controlled by one part of the brain while instructions are processed by another.

You can only use one of these areas at a time.

The mind can process things in a way that doesn’t require the athlete to “think’ about their actions.

Now, I know what you’re going to say, “Athletes have to think while they play”.

Of course they do… but it’s how they are thinking that makes all the difference.

Have you ever seen a player ‘in the zone”? Hitting every shot or making every play?

Do you think they are listening to instructions during this time? Is that the reason they are on fire?

The zone they are in is in the instinctual part of their brain.

If athletes are constantly bombarded with parent coaching, this takes away from the athlete’s ability to think instinctually.

Parents yelling instructions from the bleachers only confuse the athlete.

Even with the most caring intentions these instructrions are ultimately detrimental to your athlete’s performance.

So what should you be yelling from the bleachers?

Athletes need to know that their parents love and support them regardless of how they play.

They have to feel like their parents will be there for them in a way that has NOTHING to do with performance.

Kids who KNOW that their parents are in their corner without judgement perform better. Period!

I heard a youth coach once say “parents cheer and coaches coach”.

This is great motto to keep in mind at your child’s sporting events.

Here’s a tip that might help you stay away from parent coaching.

When you are at a sporting event for your child never yell any phrase that contains a verb.

Keep from saying things like, “Play defense!”, “Shoot the ball!” or “Run faster!”

Instead use phrases like, “”Great play!”, “Awesome shot!” and “Nice pass!”

It may seem silly but you need to stick to positive cheering instead of instructional coaching from the stands.

This will allow your child to play without over-thinking and they will know that you are there to be their biggest fan and not their second coach.