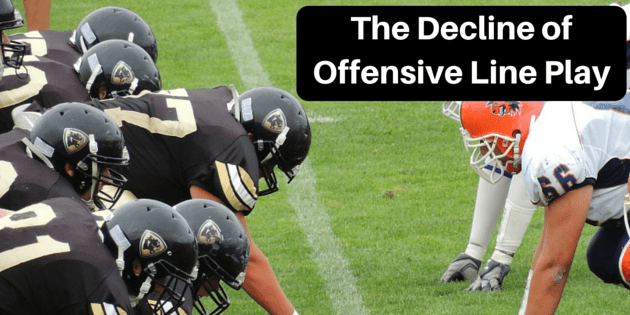 The Decline of Offensive Line Play

Last week I had a chance to go to the Wisconsin Football Coaches Clinic and talk to coaches about offensive line play.

It’s always great to network and talk football with other coaches.

Coach Glenn and I had a chance to speak to quite a few college coaches and we heard many voicing the same concern.

Many college coaches feel there is a lack of fundamentally skilled offensive linemen coming out of high school.

We are hearing more and more about NFL coaches saying the same thing about college offensive linemen.

Why The Decrease In Quality Offensive Line Play?

High school and college football has changed dramatically over the past decade.

The emphasis for coaches has shifted heavily to teaching a scheme or a system.

While the scheme an offense uses and how well they teach it is important, fundamentals cannot be sacrificed for scheme.

Pressure to win, and win now, has a big impact on a programs.

If a coach doesn’t win they are out.

That is true at EVERY level. Even youth football.

One of the things coaches are doing in an attempt to win is focusing on a scheme.

A well coached scheme can help you win football games.

The fact is, scheme is easier to teach than fundamentals.

How many times have you heard, ‘We just don’t have the kids to do that scheme”?

I have heard it many, many times.

The fact is, you can make any scheme work if you coach it well enough.

Coached well enough any scheme can work. (The chicken wing might be tough.)

The problem is that a lot of schemes today don’t put emphasis on great blocking up front.

This is a great offensive scheme!

However, coaches have to spend more time on QBs, running backs and receivers because the scheme is so complex.

What we see is that the programs that spend time to have great technique in the line as well as a strong scheme, win championships.

Schemes are important and some are quite ingenious and effective.

The point is that coaches don’t spend as much time on fundamental line play, thinking that scheme is what will make their program successful.

I know this is a generalization and there are a bunch of coaches that are teaching great fundamental line play.

So don’t get bent out of shape if that ‘s you.

Others out there, and there are quite a few, are not spending the time on their offensive lines.

In many programs there just isn’t anyone with good offensive line coaching experience.

It’s very rare at the youth level but many times at the high school level too, to find good o-line guys.

The problem is growing as we are seeing scheme trump fundamentals.

Coaches who come out of programs that didn’t teach fundamentals well are not going to be able to teach it either.

The pickings become more and more slim every year.

This may seem unfair but I believe, very strongly, that it’s true.

Anyone who coaches is an exceptional person in my mind.

I never want to take away from the time and effort that all coaches put in.

It doesn’t change the fact that we are woefully short on o-line coaches with quality experience and training.

The crazy thing is that an offensive line constitutes 45% of the players on that side of the ball.

You’d think we would spend more time and effort on it, huh?

What Can We Do To Improve Offensive Line Play?

Again, I know that scheme is important.

Consider how good your team could be if you taught great fundament line play with your awesome scheme.

Fundamentals need to start in the youth programs.

The reason many coaches say, “we don’t have the kids to run that offense” is because those big kids quit before they get to high school.

The coaches put the emphasis of the programs on the “skill” positions and the scheme.

We need to change the way we treat the big kids in our youth programs.

There is a lot more to fundamental line play than telling a kid, “Block!”

Footwork, body control, pad level, hand placement and punch are just a few of the critical aspects to teach a lineman.

There are coaches that say, “All of those things are overkill for youth players. They can’t handle it.”

Yet those same coaches teach the subtle nuances of playing quarterback, running back, receiver, linebacker and defensive back.

I’m not sure it can be emphasized enough… HALF of your offense are linemen.

Make sure that those who coach your linemen are getting training and education on the fundamentals.

Too many times the line is coached by the parent who had to coerced to help out with his son’s team.

He knows nothing about line play and doesn’t even know where to get information.

There is high school near me who had their varsity offensive line coach give up his position just prior to the season.

They didn’t even replace him.

The kids basically had to coach themselves.

Half of your offensive doesn’t have a coach?

I’m a firm believer that a good coach can coach anything if they are given the right information and training.

There is no excuse to have a youth or high school program that doesn’t put a focus on line play.

The “skill” of the guys up front will always win out over scheme.

Linemen need to be thought of as “skilled” players because it takes skill to be a good lineman.

We need to keep more kids in our youth football programs. 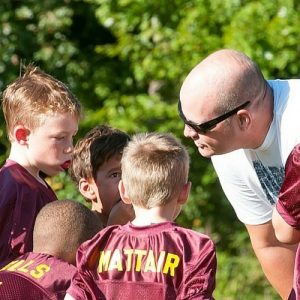 The only way to do this is to make their experience as positive as we can.

Coaches need to build players up.

They need to reinforce what their players are doing well and they need to teach the areas where they are struggling.

Yelling at a player about what they are doing wrong is not making the player better.

Here’s a good rule for any coach…

“Be loud when you praise. Be quiet when you correct and teach.”

Your tone when you coach means everything to players.

Without good line coaching, we have big kids who aren’t getting a lot of attention in practice.

Then these kids make mistakes and get yelled at in games.

Do you think these kids want to keep playing?

Positive coaching is important for all kids in all youth sports.

This change can have the biggest impact on the success of a program.

We need positive coaches who are positive role models making  a positive impact on kids.

I hope your found some value learning how to improve offensive line play.